“Although I played a spoiled kid in TV series Tiger Mom Cat Dad, but I am actually a strong and independent girl. I even help my mom with housework.”

On May 31st, child star Ji Zihan appeared in the press conference for the 2015 Vinda National Parent-child Relationship Report and talked about herself in real life.

The 2015 Vinda National Parent-child Relationship Report was jointly released by Vinda, the College of Social Science in Guangdong and Babytree, a large parental social platform in China. The report shows that opposite to general public’s perception of post-00 and post-10s children, over half of the parents interviewed consider their kids to be independent and strong. 94.2% of parents say they attach great importance to children’s personality development.

“A lot of things can be changed in 10 years. For example, mobiles were seldom used 10 years ago, but now they are must-haves for children in the city. We can no longer look at the parent-child relationship as it was in the past, but to learn it in its new form. ”said Zuo Xiaosi, deputy director of the Sociology and Demographics Institute in the Chinese Academy of Social Science.

In fact, results of the survey have been unexpected but reasonable. People used to think post-80s and 90s the beat generation. When these people grew up, the public started to worry about the post-00s and 10s to be the spoiled generation. Vinda’s report helps us to better understand the new generation.

According to the report, 94.2% of parents pay attention to children’s personality development. 56.1% think their kids strong. 49.5% wish their kids to live an ordinary life, surprisingly, while 20.1% of the interviewed want their children to be as successful as Jack Ma.

Compared to the free range education of last generation, report reveals young parents are more willing to spend time with children. 55.7% of parents say they spend over 3 hours with children every day. Satisfaction rate for these parents surpasses 78.5%. The longer parents are with their children, the report says, the better their relationships are.

The research was started by Vinda, consulted by the Chinese Academy of Social Science and undertook by Babytree through user survey and data mining. Post-80s parents were chosen as main research subjects. 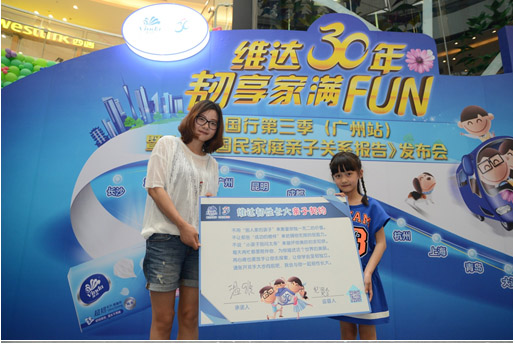 This is the second issue of Vinda’s child-parent relationship report. Vinda says, it will continue to work with well-established institutions and medias in providing the annual report on child-parent relationship. “Our report is more than a survey. It records the family relationship of this age, the attitude of younger parents, and most importantly, it provides a guide for parents who know little about raising children and helps their kids to grow stronger.